Đánh giá:
4.67/5 trong 5 Đánh giá
If you have chance to visit here, I'm sure that you will get more unforgettable memories about the local people, the regional culture characteristic.

Vietnam is well known as a heaven with plenty of magical destinations with specific culture characteristics. If the floating market in Mekong Detal is the speciality in the South of Vietnam, tourists are attracted by the wild and magnificent beauty in the North Vietnam attract with ranges of rugged rocky mountains stretching far beyond the eye. Among the highest regions of Vietnam, Ha Giang is definitely a great destination for the sightseeing of mountainous landscapes. Ha Giang’s resident consists mainly of minor ethnic groups who make up its own culture so if you have chance to visit here, I'm sure that you will get more unforgettable memories about the local people, the regional culture characteristic

Located in the border area of the country, Dong Van rock plateau in Ha Giang is one of the most majestic landscape in Vietnam. The plateau has gathered the wonderful natural sceneries which have diverse scientific value and contain the special cultural traits of ethnic communities in Vietnam. Perhaps many Vietnamese people always wish to come to the legendary border in the Dong Van rock plateau, which is considered as “ the roof of Vietnam” with the winding stone mountains generating the charming and picturesque beauty 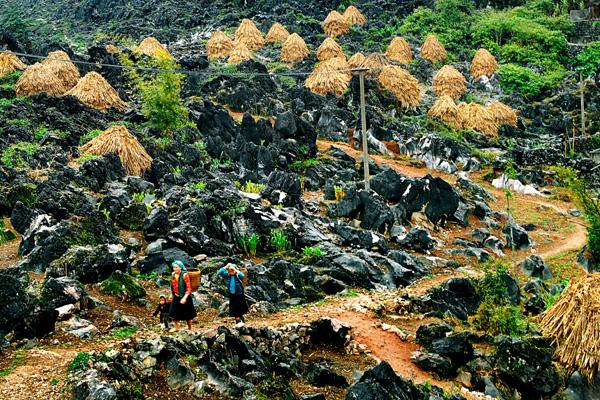 With the average altitude of 1400-1600m above sea level and the total area of 2530km2, from Ha Giang town to Dong Van, the first land of the country, it is a 200km long journey with many bends, especially one side is steep cliffs, the other is deep chasms. There are some waterfalls looming behind the cliffs and terraces mixes together, the lovely villages with a stilt floor hidden behind stone walls. In the springs, if you come here, this is the blossoming season in the plateau when all kinds of flowers including peach, plum, and mustard greens are blossoming around Lung Cu forest and intersperse remaining snow sparkling under the sunny. There are peach flowers growing in the morning dew, looming the vast of “sa moc” rows like as thousands of umbrellas rising despite the fog, snow, cold wind under the village. Such an image could make tourists feel like in a fairyland. The flower colors, in concert with colorful dresses of H’Mong and Dao ethnic minority girls, form a picturesque scene of spring in Ha Giang mountains. 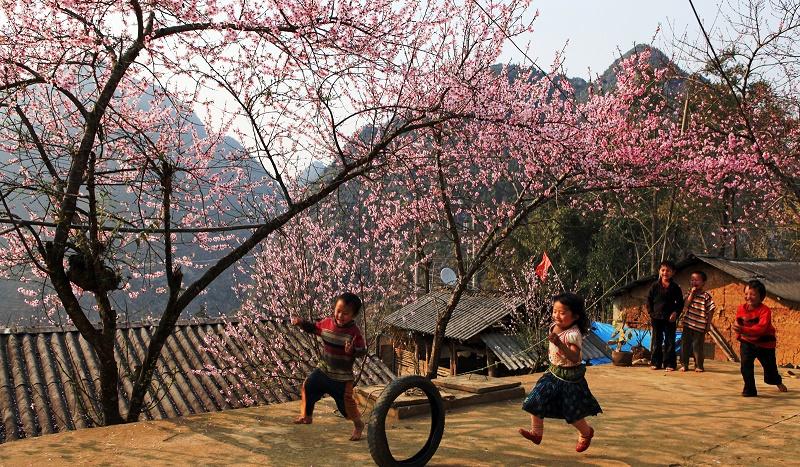 The plateau is the home of beach blossom on earth- source: internet

According to the preliminary statistics, Dong Van plateau is the global geological park, the first place of the country with 45 geomorphology heritages, 33 tectonics sides and lots of fossils in sedimentary rock layers.In particularly, there are many heritages ranked as national and international sites. They are the level surface, the river ground, the delta corroding the mountain, the mysterious caves at different high grades, the karst sinkholes, a numerous of large river valleys, the deep canyons, the stone forest, the rock deserts and limestone mountains with shape of fixed conical removable hat and gigantic pyramid on top of Ma Pi Leng, the exotic stone forest and garden in the Khau Vai love market..... Especially, the Nho Que alley which is formed by faulting of the crust with the deep over a kilometer and steep limestone cliffs at the height of 700m, is rare in the world. Going on Ma Pi Leng Pas and looking into the abyss, Nho Que river is just like a thread and it will take you more a day to go down the water of the river. It considered as the unique geological heritage and landscape. The alley of Nho Que river considered as one of the most unique and rare tectonic valleys in Vietnam, The peak of the Pass known as one of the most beautiful places to overview the scene in Vietnam. When standing on the top of Ma Pi Leng, you will be filled with emotion when witnessing a colorful border plateau as a vivid picture, a masterpiece that nature bestowed the rocky highlands of Ha Giang 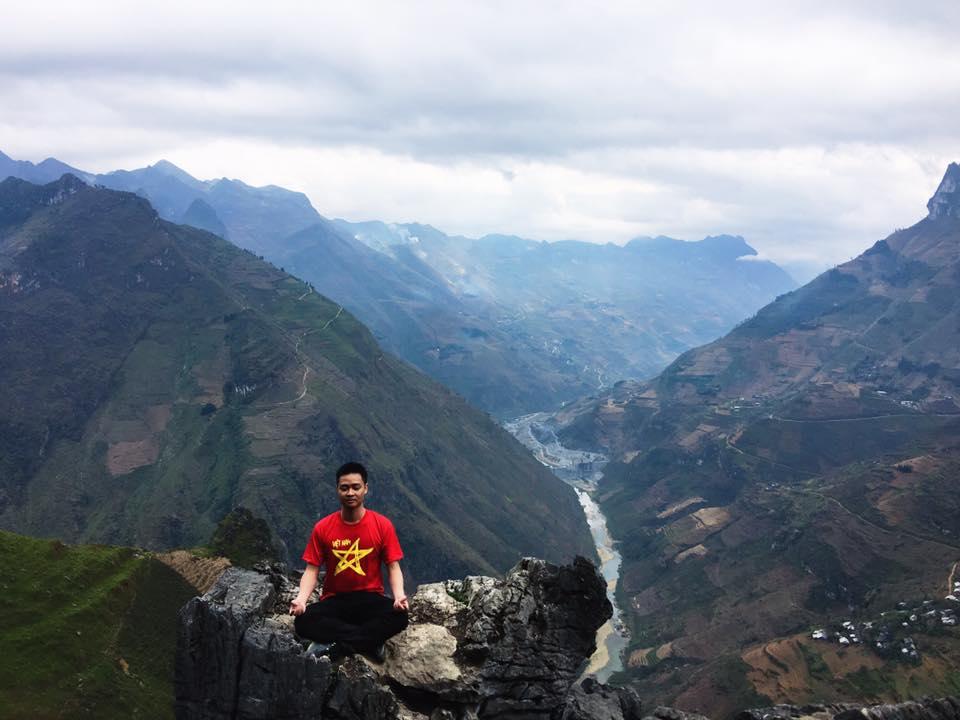 Where your sweet memories are kept forever- source: internet

Coming Ha Giang, you can not miss Quan Ba destination known as “ heaven gate”. There has someone ever stood at the heaven gate to shout that:

Imagining as rading winds to visit the world”

If no heaven gate, no high view to asphalt road towering, of course, there will not be able to open poetic and erotic landscapes named Vu Co Tien Quan Ba. Although the living standard here is still low but we still must recognize that the stone with its sexy attraction is showing a thank dance to the heaven and earth that were born it. Who has said that the stone flower forest does not radiate flavor? Who has said that senseless rock does not know the pride? This is the only place in Vietnam, a respectable position known as the stone plateau, is an inhibition place of 250.000 people from 17 different ethnic groups in Vietnam.The special cultural traditions of ethnic people living here create strange attraction for domestic and foreign tourists. The house with several hundred years old in the old town of Dong Van has preserved cultural values of the people. The love market is also a communal activity expressing the culture of minority groups in Dong Van and it is held only once a year on the 27th of the third lunar month. It is not to trade goods but it is one of the most famous love markets in Vietnam even the most unique and rare in the world. The market is opened on the hill in the Khau Vai village, Meo Vac district and is a popular meeting place for ethnic groups. It features food and drinks culture, song performances and folk games and the area have become a dating spot for couples. Festival goers will have a chance to try horse riding, taste some traditional foods such as maize wine, goat hot pot, smoked pork...and wearing the customers of ethnic people. Especially in the love market, as its name, anyone who is in the marriage ages will leave their home to take part in some folk performances together and they’re free to meet with their ex-lovers in public. It is also the way to help the man who can not have enough money to satisfy the girl’s requirement still have chance to get married. Beside joining love market, Lung Cu flagpole is also an interesting destination attracting tourists in the country and other countries. 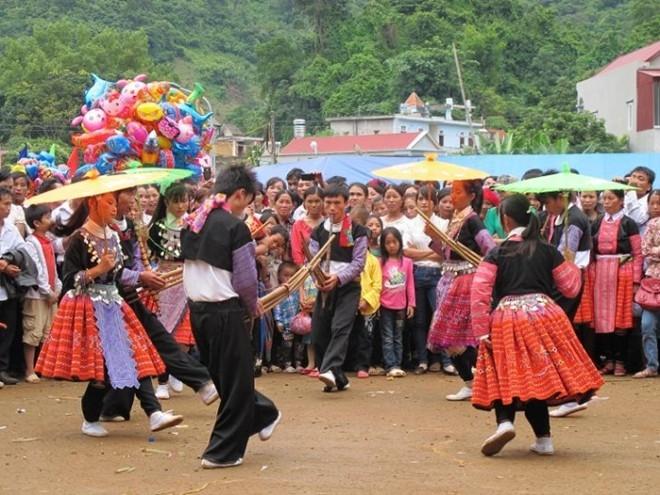 The people in Dong Van highland are living with stones, paving stones for building houses, farming on the rocks, carving stone to find the fresh water source. It could be said that the life and the culture of people living here are associated with stones and rocks. All of that make a wild and unique beauty, an attractive destination for not only domestic but also foreign visitors

If you’re curious about this, let’s contact us at https://vietmediatravel.com. We’re sure you will don’t want to leave after enjoying the wonderful time here. Welcome all of you with warm heart and opened arms!

FLOATING MARKETS - AN UNIQUE ATTRACTIVENESS IN SOUTHWEST OF VIETNAM

7 things can not be missed when traveling to Mui Ne

28/03/2017
841
There are tons of reasons to visit Mui Ne and Phan Thiet. From splendid sunsets, dreamlike scenery, to sparkling beaches, and picturesque villages, you can enjoy many breath-taking landscapes in Phan Thiet – Mui Ne.